9 (during Growing Up Fast)
16 (during Future Imperfect)
19 (during Escape! and all subsequent events) (unverified)

Growing Up Fast
Future Imperfect
Escape!
Trouble on the Homefront

Very Good In Growing Up Fast, Future Imperfect and the beginning of Escape!
Neutral in Trouble on the Homefront

None (Growing Up Fast)
EyebrowF
“My God, what have you done? You killed him! Why would you kill my father?”

Amata's mother died when she was two. Amata and the Lone Wanderer were brought together by the shared experience of not knowing their mothers.

Growing up in the vault, she yearns for a day when their society does not have to remain inside it, and wishes to convince her father, whom she loves dearly, to see the value in trying to live on the surface again.[Non-canon 1] As a teenager, Amata became self-conscious about her weight.

James writes in her medical file that she is concerned that her father doesn't trust her and that his insistence on being present precludes any possibility of doctor-patient confidentiality. James, however, believes that Amata can be trusted to avoid making bad decisions.[1]

When Amata completes the G.O.A.T., she is informed by her teacher Mr. Brotch that she is on a supervisory track.[2]

Amata's Fate: Completing Trouble on the Homefront by destroying the vault's reactor enables a random encounter involving Amata and an Enclave officer leading a pair of Enclave soldiers. They will ask her for the location of Vault 101, which she will give to them. Afterward, the soldiers will open fire and kill her, unless they are killed first. If she lives, she will walk away, and scold the Lone Wanderer; saying to stay away from her - it is all the Lone Wanderer's fault.[6]

* Only if she was told to keep the pistol during "Escape!" 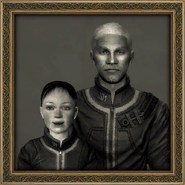 Young Amata and her father

Amata as a young adult during Escape!

Amata being interrogated by Officer Mack and her father 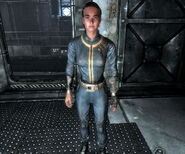 Amata saying goodbye to the Lone Wanderer near the vault door

Amata's model in a Vault 106 hallucination

Amata's drowned body in a hallucination in Point Lookout