Alpine River Cabins is a location in the Forest region of Appalachia.[1]

Right off of route 88, this area initially seems to be haunted. Screams can be heard and the ground shakes every so often, picture frames in the cabins spin in a haunted manner and doors may be seen closing by themselves. However, all these events are controlled by a terminal in a treehouse to the south of the cabins. The terminal allows one to control the effects individually, but can also run an automated sequence.

The main area has four cabins that surround an unusable makeshift bonfire pit. There is a raised picnic area to the north of the westernmost cabin. The picnic area contains a grill, an overturned table and an upright table with some minor things on it. There is a covered bulletin board on the trail between the western cabins. That trail leads to an outhouse that is visible from the bulletin board. The southwestern cabin is the largest cabin, and each cabin has suitcases and other miscellaneous searchable containers.

Screams can be heard and the ground shakes every so often in this small group of cabins. The picture frames in the cabins spin and move. Doors can also be seen and heard closing by themselves without any contact with the player character or an enemy. They tend to close by themselves even a brief moment after being opened. Up the nearby hill, there is a treehouse that contains a terminal. Currently set on automatic mode, one can individually select different modes. This can allow for drawing more enemies or wildlife to the cabins as well as initiating all the haunting effects. 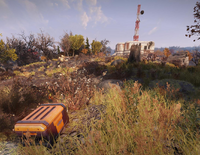