Evil
Neutral (During Growing Up Fast)

Helps nobody (Growing Up Fast & Escape)
Helps friends and allies

EyebrowM
BeardGoateeThin
BeardMustacheCurlyThin
“And what makes you so certain about that? I can't imagine you're still so naive after spending time in that hell outside. None of them know what the outside is like, and most of them would die out there. Then the rest of us inside would eventually die out, too. I won't risk all of our lives just for few people's passing fancy of taking a Wasteland vacation. I hope you can understand that.”

When Almodovar grew up in Vault 101, the vault dwellers were allowed to explore the outside world, voiding the original intention for the vault's experiment by the Vault-Tec Corporation. His parents, however, felt that the vault dwellers would be safer inside and believed all of them should remain indoors, and their beliefs were instilled in him.

One day, the current overseer disappeared outside in the wasteland. No one really knew what happened, although some suspected foul play. Almodovar, who was young, charismatic and determined at the time, rose to the occasion and offered them new leadership, to which they accepted.[Non-canon 1] Since then, no one has left the vault.

In the late 2250s, Overseer Almodovar accepted James and his child into the vault, and James was assigned to be the new vault physician.

Around this time, Almodovar had one child named Amata. When Amata was two, Almodovar's partner died.

The dossier on Amata, located in the overseer's terminal, reveals that he feels conflicted between his role as father and as overseer, attempting to find a balance between the duties that come with both. He states that no matter what he tries, Amata just seems to see him as "The Overseer".[1]

* Only during Trouble on the Homefront.

Alphonse Almodovar appears only in Fallout 3.

In promotional content for Fallout 76, a teammate with the nickname "AAlmadovar" can be seen.

Overseer Almodovar, during Growing Up Fast 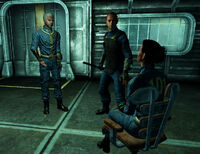 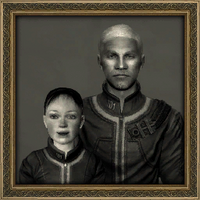 Alphonse and a young Amata