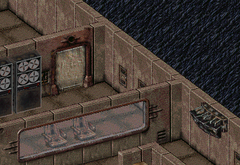 Open this wall safe the for the experiment disk

“The label on this holotape reads: "Alpha Experiment Log"”

The Alpha experiment disk is a holodisk in Fallout.

Found in a wall safe on the east side of level 5 (testing labs) of the Glow.

In the hopes of countering the current bacteriological and viral agents employed by the Chinese government, we have manufactured a virus fragment consisting of ribonucleic acid (RNA) encased in a protein-lipid sheath. This virion contains a specially arranged sequence of radiated amino acids (RAA) that are capable of attaching to non-specific binding sites on deoxyribonucleic acid (DNA) and force a non-replicating mitosis to occur. The resulting host cell is left with a quadruple-helix DNA structure.

Early tests are promising. The virion easily penetrates the cell membrane and attaches directly to the host DNA in the nucleus. Mitosis of the structure begins almost immediately. Cytokinesis is prevented by controlling the disposition of the kinetochore fibers during anaphase. The entire mitotic cycle lasts approximately 2 hours, although phenotypical expression of the new structure may take days or weeks to become apparent.

In addition to an effective immunity to bacterial and viral agents, the quad-helix structure is almost entirely immune to errors introduced in base pairing during replication due to multiplicity of the base sequence. Radiation-exposed tissue showed no mutation in the base sequence and protein synthesis mechanisms in the ribosomes were unimpaired.

Over 80% of the samples tissue contained quad-helix DNA. Most affected was muscle and bone tissue, as well as secretory cells, as these cells seem most receptive to virion. Sensory cells are the least affected. Surprisingly, even normally non-replicating nerve cells and nonsomatic cell were induced to begin mitosis. Further experiments will be necessary to determine the results on these cells.

In the Pip-Boy 2000, this entry is titled "Alpha Experiment Tape".