EyebrowM
“Well done, Mister Burke! What a grand display of fireworks! I almost wish there was another nuke we could detonate. You don't see that very often.”— Allistair Tenpenny, commenting on the destruction of Megaton

Allistair Tenpenny is the founder and owner of Tenpenny Tower in 2277.

Seeking wealth from the region, he came to the Capital Wasteland as a British refugee.[1] He discovered the elegant-looking tall building and decided to name it after himself, seeing it as a chance to provide others with a higher standard of living. Tenpenny spends most of his days alone, save for the company of Mister Burke and Susan Lancaster on occasion.[2]

His wealth and comfort have made him quite bored with life, however, so he challenges himself by sniping at not only the creatures roaming below, but the occasional visitors as well.[Non-canon 1]

In a Fallout 3 afterthoughts feature, Emil Pagliarulo mentions Allistair Tenpenny, in that he traveled to the Capital Wasteland from Great Britain in order to seek his fortune. Pagliarulo stated that by mentioning small details about the state of the rest of the world, characters like Tenpenny can "serve as a catalyst" for players' imaginations.[Non-canon 2]

Allistair Tenpenny in an endings slide

Original concept art from The Art of Fallout 3 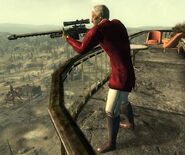 Tenpenny aiming his .308 rifle into the Wasteland