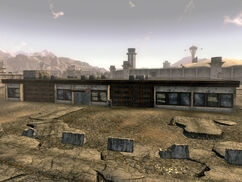 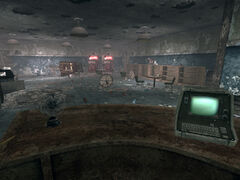 Allied Technologies offices is a location in the Mojave Wasteland in 2281. It is located south-southeast of Camp McCarran and north of the ant mound.

Allied Technologies offices lie in the disputed territory south of Camp McCarran. Typically to the north at the surrounding walls of the NCR camp, a pair of NCR troopers are found standing guard. Further south are fire ants guarding their mound. Fiends also spawn around the exterior of the building.

The office building is abandoned with extensive interior damage, due to a collapsed ceiling. Inside the building are many giant ants. There are three main rooms containing desks and lockers holding minor loot. A Sunset Sarsaparilla and two Nuka-Cola vending machines can be found in the back room.

The Allied Technologies offices appear only in Fallout: New Vegas.

Tales of a Junktown Jerky Vendor
Add a photo to this gallery
Retrieved from "https://fallout.fandom.com/wiki/Allied_Technologies_offices?oldid=3513579"
Community content is available under CC-BY-SA unless otherwise noted.