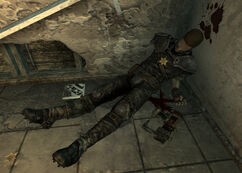 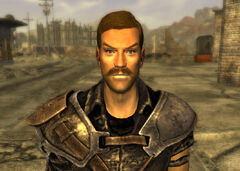 Allen Marks is a deceased Sunset Sarsaparilla star bottle cap hunter in the Mojave Wasteland in 2281.

He is first mentioned by Malcolm Holmes, who warns about Marks' murderous attitude toward people with the star caps. Marks' body can be found during the quest A Valuable Lesson, whose title refers to the great crimes Allen Marks had committed in order to receive what proved to be not only a worthless prize but also a fitting end.

Allen Marks died after being trapped inside the Sunset Sarsaparilla headquarters storeroom. The cause of his death was suffocation from the airtight seal of the storeroom doors. Before his death, he recorded a holotape which can be found next to his body. In the holotape, Marks realized the gravity of his crimes and faces his inevitable death calmly. He remembers his mother's quote that, "people who murder and steal die bad in the end." Marks reflects this before dying of asphyxiation, having run out of air. His unique laser pistol, Pew Pew, can be found near his body.

A deputy badge can be found resting on him (not in his inventory). Moving the body will cause the badge to fall off.

Retrieved from "https://fallout.fandom.com/wiki/Allen_Marks?oldid=3261832"
Community content is available under CC-BY-SA unless otherwise noted.