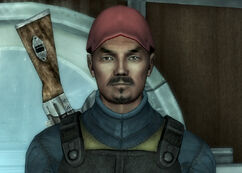 (Trouble on the Homefront)

Escape!:
Helps nobody
Trouble on the Homefront:
Helps allies 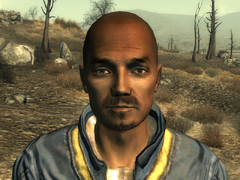 Allen Mack without his cap

“And while we're down here, I'm in charge. Like the G.O.A.T. said: "To whom do we owe everything you have, including our lives?" The Overseer! And that's me!”

Allen Mack is a resident and potential overseer of Vault 101 in the year 2277.

Allen Mack has taught basic survival skills to his children but isn't overly fond of showing emotion. Should the previous overseer, Alphonse Almodovar, ever become incapacitated, Allen has vowed to take over the running of Vault 101.[1]

Allen Mack is the husband of Gloria Mack, and the father of Wally, Steve and Susie Mack. His father-in-law is Stanley Armstrong. He also has two sisters-in-law, Beatrice Armstrong and Mary Kendall.

During the quest Escape!, Allen Mack can be seen in an inaccessible common room, pounding on and shouting through the glass to alert others to the Lone Wanderer's presence.

* Only during Trouble on the Homefront if he becomes the overseer.

Allen Mack appears only in Fallout 3. 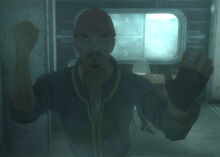 Locked up during Escape!
Add a photo to this gallery

Retrieved from "https://fallout.fandom.com/wiki/Allen_Mack?oldid=3314190"
Community content is available under CC-BY-SA unless otherwise noted.