“Once you start leaning on people, soon you can't walk no good on your own.”— Allen Lee

Allen Lee is the owner of the gun store in Far Harbor in 2287.

Allen Lee is a resident of Far Harbor. He is very outspoken about his hatred of the Children of Atom and is the one responsible for the death of one of their missionaries who came to the town. This ignited hostilities between the two groups. He is also very distrustful of mainlanders. Lee and Captain Avery are often in disagreement about the way things should be handled on the island.

He plays a very decisive part in deciding the fate of the Island should the player character make decisions that lead to interactions between the people of Far Harbor and DiMA.

Allen Lee appears only in the Fallout 4 add-on Far Harbor. 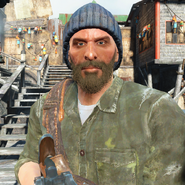