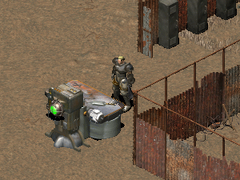 “I certainly found my calling.”

Allen is a Brotherhood of Steel mechanic working in Bunker Epsilon in 2197.

Allen is a pleasant, rather delicate looking chap with nice manners. He seems rather bland compared to the earlier four mechanics.

Allen appears only in Fallout Tactics.

It can be assumed that Allen is a reference to the journalist/reporter Amy Amanda "Triple A" Allen, who starred in the first two seasons of the eighties TV-series The A-Team, as the names of the mechanics in the other four bunkers form the names of the four main characters of the A-Team.

Retrieved from "https://fallout.fandom.com/wiki/Allen_(mechanic)?oldid=3326324"
Community content is available under CC-BY-SA unless otherwise noted.