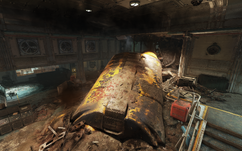 All That Glitters is a main quest in the Fallout 76 update Wastelanders.

With the Motherlode's intelligence core replaced and Penny safely back among friends, the heist can proceed as planned.

Returning to Freddy Fear's basement will reveal that the Motherlode has already dug a tunnel into the Vault. The player simply has to talk with Paige to launch the heist. The tunnel leads deep below the earth and is filled with cave crickets, mole miners, and other critters. The team will follow, and although they are armed (Jen and Penny have 10mm pistols, Radcliff a combat rifle), the heavy lifting is up to the player.

Mole miners are not fond of the disturbance, since as Jen remarks, the Foundation team has just driven a twelve-ton drilling machine through their front door. The Motherlode will be found at the end of the tunnel, having driven into the outer wall of the Vault and paused. She will engage the player in conversation, asking for a reason to continue. Whatever the reply, it will state that this will likely result in its destruction.

It drills right into the utility chamber of the Vault, redlining its systems and giving the team access to the Vault. The chamber itself is filled with robots and four automatic laser turrets, which have to be destroyed to continue. Jen, Penny, and Radcliff will automatically approach the laser grid and after a moment's hesitation on Jen's part (betting her survival on an heirloom stealth suit that has been going on and off during the approach is understandably making her anxious), she will pass through and disable the laser grid. However, in the process, she will also activate the Vault's security forces.

After dispatching them, she will ask for a moment and explain that she'd like to return to Foundation, as going up against military-grade robots is hazardous to her health. The player can either ask her to continue or send her back to Foundation. The next step in the heist is the laser turret gauntlet. Radcliff will use the RobCo tools obtained beforehand to deal with them, but advises taking cover.

Opening the security door causes the turrets to reset, but Radcliff quickly moves to short them out using the electrical grid. The tunnel leads all the way down to the Atrium. Most of the turrets will become friendly, except for the two regular ones at the end, which will tag Radcliff - he will get up once they're gone, remarking that they must have been on a different circuit.

The terminal on the side opens the door to the Atrium, triggering yet another security alert, with waves of Mister Gutsies attacking the Foundation team, culminating in an onslaught by a legendary Sentry Bot arriving via a separate lift. Once they are defeated, Radcliff will go up to the Overseer's office to unlock access to the secure wing of the Vault, releasing a second wave, this time of feral ghouls with a glowing one at the tall end.

The quest will complete and start Secrets Revealed once the barracks area is reached and Jen with Radcliff open the secure door at the far end of the residential section. This will also unlock the A Golden Future achievement/trophy.

The quest name is a reference to the saying, "all that glitters is not gold," meaning that outward appearances can be deceiving.

Retrieved from "https://fallout.fandom.com/wiki/All_That_Glitters?oldid=3349696"
Community content is available under CC-BY-SA unless otherwise noted.