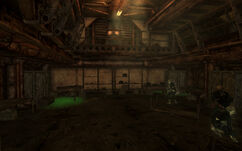 Objective: unlock the vault's armory and loot the contents.

“I was human once, you know. Grew up in Vault 34, northeast of here. Nice upbringing, if you like assault rifles and target practice. But oh, you prefer machines that don't shoot people? Not so nice then.”— Chris Haversam

All Fired Up![1] is an unmarked quest in Fallout: New Vegas.

This quest takes place in Vault 34 and involves locating 2 passwords held by Vault 34 technicians (Vault 34 security terminal password and Vault 34 utility terminal password) from underwater sections. Alternatively, with a high Science skill, the player can hack terminals nearby these sections in order to gain access.

When done, the armory can be unlocked from the Overseer’s terminal and be looted for some high value weaponry. But not before a tough fight with some ghoulified Vault security officers and Vault security guards.

Vault 34's armory is reminiscent of the Level 5 Secure Testing Labs of the West Tek Research Facility, also known as The Glow, in that both the vault and the facility were testing grounds, and that both mentioned locations are radioactive treasure troves of weapons.

Retrieved from "https://fallout.fandom.com/wiki/All_Fired_Up!?oldid=3003507"
Community content is available under CC-BY-SA unless otherwise noted.