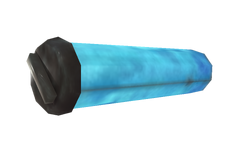 The alien power module is an Energy Weapons ammunition of alien origin found in the Fallout 3 add-on Mothership Zeta.

They are found commonly in "alien crates" and the inventories of almost every enemy aboard Mothership Zeta.