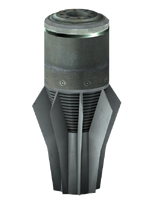 Launched from alien motherships, these beacons allow point-to-point teleport between the ship and the impact site of the beacon.

During the battle against the other mothership, one such beacon will accidentally be sent to Earth to the alien crash site, allowing the Lone Wanderer to use it for traveling between Earth and Mothership Zeta.

An alien homing beacon only appears in the Fallout 3 add-on Mothership Zeta.

Sometimes, when one tries to travel back to the spaceship, using the alien homing beacon, they will freeze. [verified]

A beacon in use

A beacon on hold
Add a photo to this gallery
Retrieved from "https://fallout.fandom.com/wiki/Alien_homing_beacon?oldid=3434128"
Community content is available under CC-BY-SA unless otherwise noted.
... more about "Alien homing beacon"
RDF feed
Has platform
Playstation 3 +  and Xbox 360 +