The alien disintegrator is an energy weapon in the Fallout 3 add-on Mothership Zeta.

The alien disintegrator is an energy weapon created by aliens, and is the primary rifle used by the alien soldiers onboard Mothership Zeta in 2277, along with the alien atomizer.

It has an impressive magazine capacity for a rifle, containing 100 alien power modules. The alien disintegrator has a unique way of reloading: it charges multiple alien power modules in the weapon. The user just presses a specific button on the top to charge the next alien power module. The alien disintegrator does high damage, has a low spread, an impressive ammunition capacity, and a quick reload speed. Although it has good accuracy, its accuracy is not as good as that of the alien atomizer. However, it remains reliable for middle and short-range combat.

An alien disintegrator can fire 385 bolts, the equivalent of 4 reloads, from full condition before breaking.

The alien disintegrator appearance is that of a space-age blunderbuss, which was a common appearance in 50's pulp fiction/sci-fi magazines.

Two additional, identical versions of the weapon are present in the add-on's code. Examined in the G.E.C.K., they differ only by their IDs, DLC05WeapRifleB and DLC05WeapRifleC. They are otherwise identical to normal alien disintegrators and are even affected by the Xenotech Expert perk, but cannot be used to repair normal alien disintegrators or its variant. Though not placed anywhere in the add-on, these weapons have been known to show up on occasion for reasons unknown. [verified] 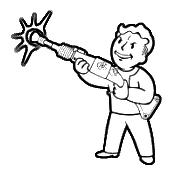 As depicted in Xenotech Expert
Add a photo to this gallery
Retrieved from "https://fallout.fandom.com/wiki/Alien_disintegrator_(Mothership_Zeta)?oldid=3459528"
Community content is available under CC-BY-SA unless otherwise noted.