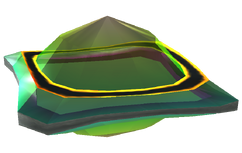 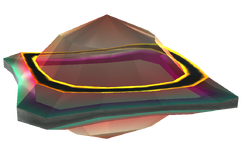 Alien crystals come in two variations: small and large. They are only found aboard Mothership Zeta on some aliens, lying on some tables or shelves where they are especially hidden among the alien artifacts that cannot be picked up. Most quantities for both variants are found in the hangar and robot assembly.

They are weightless and have values of 10 and 20 bottle caps respectively. They have no other use besides as trade items, Rock-It Launcher ammunition, or as a decoration.

Retrieved from "https://fallout.fandom.com/wiki/Alien_crystal?oldid=3507582"
Community content is available under CC-BY-SA unless otherwise noted.