Fallout 3
Mothership Zeta
“Hey, I thought you should know... Someone must've hit a button during the fight just now. If I understood the display correctly, I think we sort of launched a homing beacon of some kind down to the surface. Landed just outside DC. I wouldn't mention it, except that I think... Like I said, I'm not sure... I think it's a way to get back to earth.”— Elliott Tercorien

The alien crash site is an unmarked location in the Capital Wasteland in 2277. It is equidistant from the clifftop shacks to the northwest and Greener Pastures disposal site to the southeast.

The location contains the remains of an alien recon craft (Theta), which crashed through a house and came to rest in a cliffside. Next to the craft is a dead alien that cannot be interacted with or looted. It is the source of one of the Capital Wasteland's radio signals, known as the Recon craft Theta signal.

Behind the house lies the wrecked recon craft. It is badly damaged and leaking an unspecified radioactive liquid, dealing 4 rads/s. The only point of interest is at the front of the ship, the side opposite the ruined house. If the Lone Wanderer is at the MDPL-13 power station, south of the crash site, it can be found by following the power cables north until they come across the alien distress beacon. The signal is called the "Recon Craft Theta Signal" on the player character's Pip-Boy 3000.

The player character can follow this to the site as it gets louder and clearer as they get closer, and they will start to become irradiated. At the front of the ship, the cockpit dome is shattered. The pilot's body lies outside, against a pile of rocks with the powerful alien blaster in its hand. About 120 alien power cells are scattered around. The trail from the house to the ship is full of debris from the crash, most of which cannot be picked up or moved.

After the completion of the Mothership Zeta add-on, an alien homing beacon takes the place of the crashed craft as a marked location, allowing the player character to teleport to Mothership Zeta and back at will. It will also have a map marker for easy fast travel.

Site of the crash, the MDPL-13 power station in the background 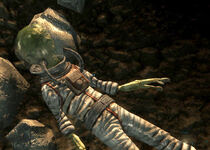 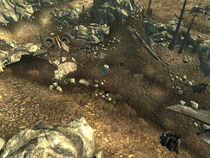 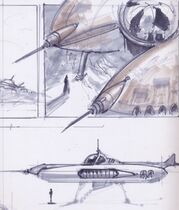 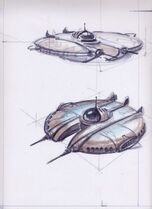