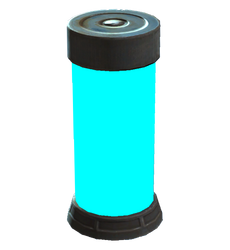 The alien blaster round is a type of ammunition in Fallout 4.

The rounds consist of a cylinder of blue energy capped at each end by metal disks, enclosing a caged projectile.[1] It is the main ammunition type used by alien weaponry.