The alien blaster pistol is a weapon in Fallout 4.

The gun is very futuristic in appearance, with a chrome and red paint job. It fires blue bolts of energy and deals 50 damage without any pistol perks. With maximum levels in Science! this weapon can be modified to run using fusion cells. This reduces the damage by two points, but extends the battery size and allows for continued use of the weapon once its standard ammo cells are depleted.

The downside to this weapon is its large shot size and slow projectile speed - these can lead to shots missing or clipping cover where a normal round would have gone through. The game treats this gun as if it is silenced for detection, but does not confer the skill-based boosts to damage for a silenced weapon from Mister Sandman or other sources.

The alien blaster pistol, however, is not a bad weapon to use in V.A.T.S. and close-range combat, due to its low AP cost, good accuracy, good DPS and great range (with the perk Gunslinger applied for the latter two). The slow travel time of the projectiles also hit grenades in the VATS better than energy weapons with faster projectile speed as those fire too early and miss the grenade, while the slower blaster bolts hit the grenade at the right time.

It can be looted off an alien, who is found inside a cave next to a UFO that crashed from the sky. The cave is just northeast of the crash site and can be found by following the green liquid on the ground and rocks.

The event may be mentioned by any follower besides Dogmeat, who may comment on seeing something crashing from out of the sky. The event is fairly loud, and a crash is heard. Go east of Oberland station, northwest of Chestnut Hillock Reservoir or north of Vault 81, to find the crash site. One can also use the "garbled radio beacon" radio signal to find the crash site. There should be fire around the crash site, making it easily spotted at night. Follow the green blood splatters to an unmarked cave, where a live alien has the blaster. The alien itself is low-leveled and easily killed, but will drop the alien blaster pistol along with a very large amount of ammo for it. 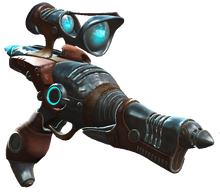 From The Art of Fallout 4
Español Français Русский Українська 中文
Community content is available under CC-BY-SA unless otherwise noted.
Advertisement