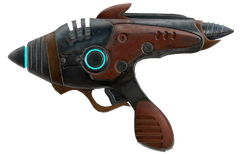 The alien blaster is a rare weapon in Fallout 76.

The alien blaster is a pistol with decent damage, but it is impractical due to its very rare ammo. A fusion mag mod will convert the weapon to fire fusion cells, but will reduce the weapon's damage output.

The weapon is of clear extraterrestrial design with its curved sleek forms, though it does resemble a pistol. The whole weapon is made of a combination of a steel-like metal, orange and red plastic-like furnishings, with highlights of blue pulsing energy. Unlike a human weapon, the blaster ends with a cone-shaped muzzle with no recognizable barrel. On the side is a button that opens a circular blue ringed cap. When the cap is open, alien blaster rounds can be loaded into the weapon. The two pronged sights are lined up through a hole with no front sight. 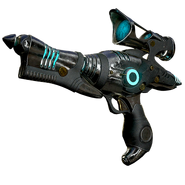 Toxic pond and wreckage, the safe is inside the ruins of the house
Add a photo to this gallery
Retrieved from "https://fallout.fandom.com/wiki/Alien_blaster_(Fallout_76)?oldid=3342039"
Community content is available under CC-BY-SA unless otherwise noted.