The alien blaster is a weapon in Fallout 3.

The alien blaster is one of the most powerful weapons in the game due to a critical hit being guaranteed. This weapon will be able to take down most foes with a single shot to the head.

This weapon also has the effect of disintegrating any enemy killed with a critical hit, identical to a laser weapon (with the exception that the disintegration effect is colored blue instead of red).

The alien blaster can fire a total of around 125 shots, equivalent to 13 reloads, from full condition before breaking but will not jam until approximately 120 shots.

Alien blaster in the gun case in the mobile base crawler 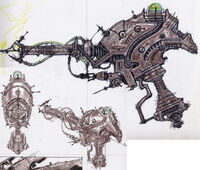 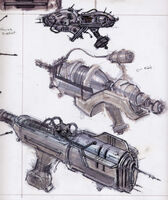 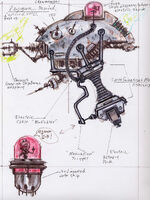 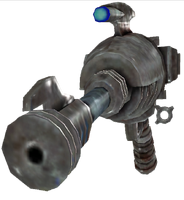