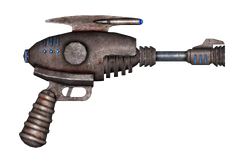 The alien blaster is a unique weapon in Fallout: New Vegas.

The alien blaster is one of the most powerful weapons in the game because a critical hit is guaranteed. This weapon will often be able to take down any foe with a single shot to the head. Enemies killed by a critical hit from this weapon are disintegrated into ash, identical to a laser with the exception that the disintegration effect is colored blue instead of red.

As with the alien blaster, the ammunition used by the pistol is also unique, meaning the 140-250 alien power cells found on the alien captain cannot be found anywhere else, limiting the use of the alien blaster.

The alien blaster can fire a total of about 2495 shots, the equivalent of 250 reloads, from full condition before breaking, significantly more than the 222-272 cells that are normally available to be found.

The alien blaster is found on the alien captain, along with 140-250 alien power cells. The captain is aided by two other aliens, all 3 of whom are armed with laser weapons. 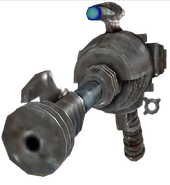 Add an image to this gallery
Retrieved from "https://fallout.fandom.com/wiki/Alien_blaster_(Fallout:_New_Vegas)?oldid=2052913"
Community content is available under CC-BY-SA unless otherwise noted.