An alien is an creature found in the Commonwealth in 2287. It can can be located in a cave near the UFO crash site.

The alien lies injured in the cave, and will not engage the Sole Survivor or any companions unless approached.

An alien that has crash-landed into the Commonwealth. It can be found in a small cave, and it will attack on sight. Upon death, it will drop its alien blaster pistol and anywhere from 295 to 500 alien blaster rounds. 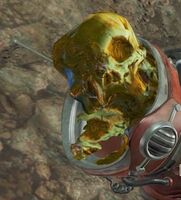 Aliens encountered during Over the Moon