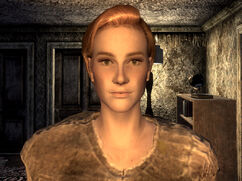 “Do they? Look at my Mother, all she cares for is a patch of bare dirt where nothing green will ever grow to feed us. My Father? A trading business that he'll never own, risking his neck every day against Wastelanders and cut-throat "merchants." And I'm supposed to be part of those dreams? What about my dreams, stranger? What about me?”

Alice Hostetler is a struggling young farmer living in the Mojave Wasteland in 2281.

Alice is the daughter of Don and Becky Hostetler. She lived in Hostetler home and hated her life as a farmer. For this reason, she ran off with Andy Scabb to North Vegas Square, unknowingly becoming involved in the illegal activities of Scabb's gang, which has made her parents especially concerned for her well-being and in danger of becoming victims of the gang themselves.

Although Andy Scabb claims to want to help Alice escape the dump, he is, in reality, a criminal who intends to use her father's association to the Crimson Caravan company to rob the business and the Hostetler household, then skip town. Although Alice's involvement in the robbery could be her undoing, as Scabb and his goons intend to ensure that she is a "good doggie" first, and then subsequently dispose of her once the money has been acquired.[1]

Until Someone to Watch Over Me is started, Alice Hostetler is not at her home. One can find a message in Andy Scabb's room in The Gray, that is evidence that proves that siding with criminals is not the right lifestyle for Alice. After one deals with Scabb, Alice will return to Hostetler home attempting to steal the Crimson Caravan earnings. She will confront the Courier, threatening to kill them if they interfere. The note found in Scabb's room can be shown to her to help talk her out of committing a crime.

If convinced to leave home, she will sometimes be at the Old Mormon Fort in Freeside, the Aerotech Office Park with Vault 34 survivors (if they were saved in Hard Luck Blues) in Aerotech suite 300, Hoover Dam, Hidden Valley bunker, at Camp Golf, near Freeside's North Gate, near Boulder City, at the Red Rock drug lab, or in Novac. When interacted with, she will say "Good to see you again. I'm just passing through here. Staying at this refugee camp under the wing of NCR thugs is the last thing on my mind."

Alice has a few unique animations, such as when she flails her arms around or reads the note (if that option is selected).

Retrieved from "https://fallout.fandom.com/wiki/Alice_Hostetler?oldid=3320348"
Community content is available under CC-BY-SA unless otherwise noted.