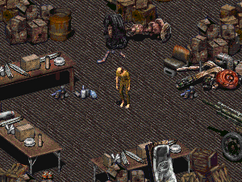 Algernon is a savant living underneath the New Reno Arms weapon shop in New Reno.

He is a dirty, slack-jawed man who enjoys whistling to himself.[1] A very curious man, Algernon's prowess with all things mechanical is not to be underestimated, although his ability to deal with other people lags behind his ability to repair and upgrade the devices around him. A conversation with Algernon is practically one-sided. Only capable of expressing himself verbally via battle sound onomatopoeia, he nevertheless seems to understand what is said to him. However, Algernon is not kept around for scintillating conversation.

Upon sighting any stock weapons, Algernon will get very excited. If he can get his hands upon an unmodified weapon, Al will appear to find true happiness - at least for a few hours - tinkering with the weapon and vastly improving it. This process is not fast, however. Improvements on any weapon will take several hours, but with two distinct advantages over any other wasteland weaponsmiths:

In addition to the more mundane pistols, rifles, and plasma weapons, Algernon can also improve both flamethrowers and the fuel they consume, making the weapons much more powerful. (see below)

A character with a low enough intelligence can start a "childhood cop and robbers" type dialogue with Algernon that results in his death.

Algernon can upgrade the following:

Algernon appears only in Fallout 2.

Algernon's focused brilliance and his name is a reference to the book Flowers for Algernon. Charlie Gordon, the main character, is a 32 year-old mentally challenged janitor who briefly becomes a genius as the result of an experimental medical procedure, but becomes mentally challenged again and dies due to an unforeseen side effect of the procedure, whereas Algernon is a laboratory mouse who has undergone surgery to increase his intelligence, with Charlie being the first human test subject.

Retrieved from "https://fallout.fandom.com/wiki/Algernon?oldid=3339027"
Community content is available under CC-BY-SA unless otherwise noted.