Jailer
2 of Clubs (with Dead Sea) 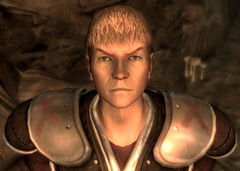 “Caesar has been seen walking among the troops. A good omen.”

Decanus Alexus is a Caesar's Legion officer camped out in Techatticup Mine in 2281.

Both Alexus and Dead Sea are legionary decanii, leading constant attacks and hostilities in NCR lands around the Colorado River, attacking places such as Camp Forlorn Hope and Nelson, taking NCR troopers as hostages and patrolling southwest lands.

Anywhere I Wander: Alexus possesses the key that unlocks the cells of two NCR soldiers. The Courier can obtain it by killing him or stealing it from him.

Alexus may not spawn at all. This does not necessarily interfere with the quest Anywhere I Wander, as the locked gates to the NCR captives can still be picked with Lockpick 50. [verified]