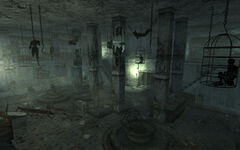 The entrance area, a playground for raiders

Alexandria Arms is a location in the Capital Wasteland in 2277, near Arlington Library. It is an abandoned two-story hotel and conference center that has limited structural damage. It is a medium-sized building with only one interior cell. The building is occupied by raiders.

Immediately to the southwest of the hotel, there is a bombed-out building that serves as a post for one additional raider. The building is littered with traps. There are frag mines covering the area leading to the side entrance and tripwires that set off rigged shotguns, bear traps, a girder on a chain, and a pitching machine. There is also an automated turret on the top floor. On the third floor are four safes, three first aid boxes, one locked footlocker, a workbench, a bed, a raider, and some .308 caliber rounds.

When the player character leaves and comes back, one raider sniper will usually take residence on the top floor. The lab table is set on top of two safes, one that is locked and one that is open.

The player character enters into an imposing lobby that includes two (non-functioning) grand water fountains and a dozen pillars reaching toward the ceiling. There is also an elevator on the opposite side of the lobby, but the elevator is inaccessible. There are also the remains of victims of the raiders hanging from the ceiling and found elsewhere in the hotel. There are some rather gruesome torsos in the lobby which the player character can grab/move. Upstairs there is another large lobby/meeting room, several Nuka-Cola vending machines, and a set of six well-furnished suites.

Alexandria Arms appears only in Fallout 3.