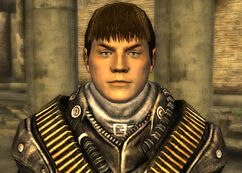 “Am I selling? Yeah. Am I selling to you? No. Sorry to hurt your feelings, but you're small time. Move along.”

Alexander is a salesman for the Gun Runners and appears beneath the 188 trading post in the Mojave Wasteland. He also makes trips to Camp McCarran and Hoover Dam around once or twice a week, to make sales and to take gun and ammunition orders. He usually just stays at the trading post because caravans take that route to avoid the I-15. He also checks his and their stock and directs their shipment deliveries. He must also make very good money as he states he is able to visit the Strip once a month and still save money for retirement.

Two Alexanders appearing, due to a bug.
Add a photo to this gallery
Retrieved from "https://fallout.fandom.com/wiki/Alexander_(Fallout:_New_Vegas)?oldid=2052895"
Community content is available under CC-BY-SA unless otherwise noted.
... more about "Alexander (Fallout: New Vegas)"
RDF feed
Has platform
PC +
FandomShop Fandom IG GalaxyQuest