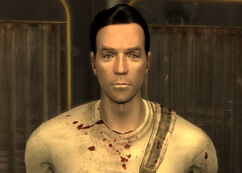 “I'm always a sucker for a pretty face. What can I do for you, my fine dear?”

Once an idealistic citizen of the republic, Richards had a good life as a doctor in the core lands of the republic. His idealism drove him to join the NCR Army out of a sense of patriotic duty, to try and make the wasteland a better place. It worked for a while, as Richards was stationed near the dam during the First Battle of Hoover Dam and witnessed the brutality of the Legion, the carnage of the battle and the elation of victory.[2] He served in that battle as a medic and was present for some of the worst of the fighting and the gruesome aftermath it left behind. Richards considers himself and anyone else who was in that battle lucky to be alive, but nonetheless stayed on and continued to serve in the Mojave.

As events began shaping up for a Second Battle of Hoover Dam, Richards was stationed at Camp Forlorn Hope, the sole surgeon, doctor and medical expert of any kind at the camp's medical center. As the Legion captured the town of Nelson, immediately to the south, and put Camp Forlorn Hope under a grim state of siege, Richards quickly found himself overworked and his talents needed more and more often. Seeing men he managed to help and or even save from death go right back to the front lines, all too often to be injured again or killed wore away the last of Richards' idealistic motivation for joining the NCR Army, making him weary and demoralized. Richards never once discusses quitting, however, and works as hard as he can to deal with the casualties that are brought to his tent.

Since then, however, his enthusiasm for service and the grand democratic project of the republic have disappeared, replaced by weariness and exhaustion. Since he joined the garrison at Camp Forlorn Hope, the steady stream of wounded and maimed soldiers has numbed him to the point where he just wants to get home. But until he's discharged, he will keep fixing the soldiers up in the morning only to see them on his operating table in the afternoon. He will keep sewing them up, applying stimpaks, chopping of limbs and more, just to make it to the end of another day. [3]

Retrieved from "https://fallout.fandom.com/wiki/Alex_Richards?oldid=3291896"
Community content is available under CC-BY-SA unless otherwise noted.