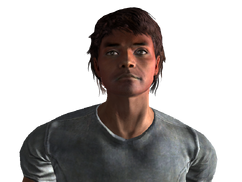 “Tina, it's me. Your brother? Alex? Listen, mom would kill me if she knew I was contacting you, but she's being an impossible bitch right now. You have to come home. Do you understand me? This thing with China... it's not going away. We're going to try to get into one of those Vaults. If that doesn't work, well... I have a backup plan. There's this secure bunker... another sort of vault... inside the National Guard depot, and... Look, no matter what it takes, the whole damn Keller family's gonna ride this storm out, but you've got to get your ass home. Now!”— Alex, on his holotape

Alex was a National Guardsman, who stole the bunker codes, so his family was able to survive the nuclear holocaust. He was caught but before he was taken into custody, he sent each member of his family a single digit of the code. This way, they would all have to be there to get in.

Alex Keller is mentioned only in Fallout 3.

Retrieved from "https://fallout.fandom.com/wiki/Alex_Keller?oldid=3273044"
Community content is available under CC-BY-SA unless otherwise noted.