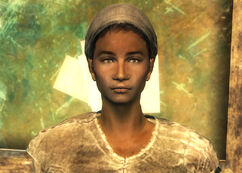 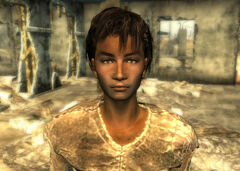 Alejandra without her head wrap

“I was young and pretty. I don't need to tell you what my duties were...”

Alejandra Torres is a runaway slave in the Temple of the Union in 2277.

Alejandra was born in 2255. Alejandra was a historian and a tinkerer.[2] She implies that she was a sex slave for four years[3] to a master who cared enough to educate her in literacy, math, history and, to some degree, science.[4] After her master got married, she was sold to Hannibal Hamlin, who promptly freed her.[5]

If the Lone Wanderer asks her what she does, she will admit that she wants to build a shrine to Abraham Lincoln.[6] She passes on her knowledge to the other freed slaves who wish to learn[7], and hopes to create a school for freed slaves in the Washington Memorial.[8]

* Only after arriving at the Memorial by siding with the slaves.

Alejandra Torres appears only in Fallout 3.

Retrieved from "https://fallout.fandom.com/wiki/Alejandra_Torres?oldid=3387685"
Community content is available under CC-BY-SA unless otherwise noted.