Helps Nobody
Helps Allies (as Scorched)
“Well, aren't you a ray of sunshine with the comfort skills of an asshole. I'd at least expect you to lie and make me think it'll be all right.”— Aldridge

Aldridge is a raider in Appalachia.

Coming to Appalachia with Meg Groberg's raiders, Aldridge immediately went to work scouting potential raid locations in the area. He investigated the Sons of Dane compound and Camp Venture, being one of the few scouts to enter the Mire and return.[1][2] Aldridge also discovered a toxic waste dump full of scorched, which Meg began looking into as part of her plan to wipe them out.[3]

Shortly before the Vault Dweller approached the Crater with a vaccine to the Scorched Plague, Aldridge and a team of raiders were sent by Meg to a toxic waste disposal site near the Philippi Battlefield Cemetery, and fought a group of Scorched there including a scorchbeast. Despite killing the scorchbeast, the team was overwhelmed by the other Scorched creatures, and Aldridge was forced to retreat into a trailer.[4]

Aldridge appears in Fallout 76, introduced in the Wastelanders update.

After his transition to Scorched, Aldridge wears a unique, non-playable version of raider leathers which adds brown leather gloves, but is not properly modelled for the Scorched body type. This will cause his torso to appear as if he was not Scorched. [verified] 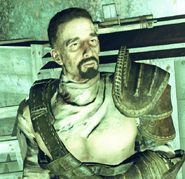