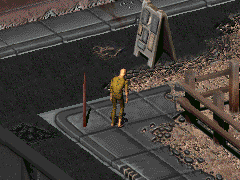 “Thanks for the money, friend. (urp) I'm going to use it to get some (hic) medicine for my dry throat. Consider yourself officially (hic) greeted to the town of Klamath. Do you have any questions about our fair (urp) metropolis?”

Aldo is the self-appointed town greeter in Klamath in 2241.

Aldo is a sickly man who wears very dirty robes.[1] He is the Klamath's town greeter. He certainly knows lots about the town, but he will only tell the Chosen One about it once given some money. According to Aldo's dialogue, he is often drunk and uses the money he rakes in from greeting to buy more alcohol 'for his throat.'

Aldo appears only in Fallout 2.

Retrieved from "https://fallout.fandom.com/wiki/Aldo?oldid=3304793"
Community content is available under CC-BY-SA unless otherwise noted.