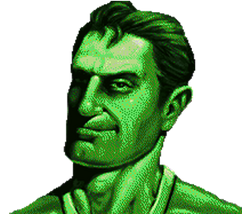 “His professed occupation is closest to what was once known as a "lawyer."”— Character selection description

Albert Cole is an inhabitant of Vault 13 in 2161 and one of the three pre-made player characters available during character creation at the beginning of Fallout.

Albert is a charismatic leader of a small, vocal minority of the Vault population that is considering life on the outside world. Dedicated to the role of a negotiator, he is often able to communicate efficiently between different parties. His professed occupation is closest to what was once known as a "lawyer." Albert is often able to convince others that his ideas are correct.

Albert only makes an appearance in Fallout.

Face of the Vault Dweller in 2161. Note the resemblance to Albert Cole.
Add an image to this gallery
Retrieved from "https://fallout.fandom.com/wiki/Albert_Cole?oldid=3126100"
Community content is available under CC-BY-SA unless otherwise noted.