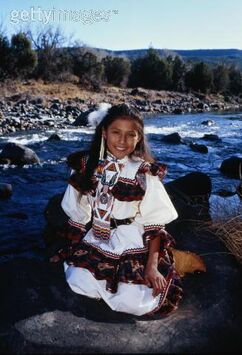 Alaya is the female chieftain of the Twin Mothers tribe in 2253.

Alaya is the female leader of the Twin Mothers tribe. It is her duty to create and enforce laws, to settle disputes, and act as the speaker of the goddess of her people. Although young, she is wise beyond her years. She is level headed and takes the time to think about any situation through to several conclusions. She then chooses what she feels is best for her people but within the guidelines of the goddess she serves.

Alaya is a devout follower of the goddess Diana. She believes that Diana is a benevolent power who wants nothing but the best for her people. With that in mind, she often seeks the guidance of the goddess when enacting new laws or settling a particularly difficult dispute. Recently, however, the goddess has stopped speaking to her which has Alaya deeply worried. She has spent a lot of time trying to decide if she, or her people, have somehow angered the goddess to the point that she abandoned them.

Alaya is currently unwed but betrothed to Eldron, her male counterpart. She and Eldron both refuse to consummate their union without the blessing of the goddess. Until they can solve the reason behind Diana's disappearance, they are remaining celibate.

Alaya was going to play a role in the quests Discover why Alaya will not marry Eldron and The Blessing of the goddess.

Alaya has not appeared nor was she mentioned in any published game. She was to appear only in Van Buren, the canceled Fallout 3 by Black Isle Studios. It is not certain if she will appear in any future Fallout game.

Retrieved from "https://fallout.fandom.com/wiki/Alaya?oldid=3175924"
Community content is available under CC-BY-SA unless otherwise noted.