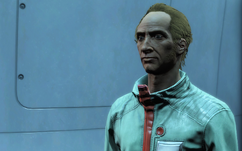 “I'd just like to apologize for any... trouble... our synths may have caused for you on your way here.”

Alan Binet (username Binet.A) is the head of the Institute's Robotics division in 2287.

Head of the Robotics division of The Institute, Alan Binet was instrumental in creating third generation synths. He is a talented designer, a must in the Institute's meritocratic environment, and believes in a healthy work/life balance and tries to put his work out of mind when he retires for the day.[1] Binet fully believes that the synths are potentially sentient beings and has had many arguments over it with his friend and colleague, Max Loken. His impassioned speeches about artificial sentience and machines are a constant feature of Robotics, so much that Loken could write them down from memory. Binet is keenly aware that his words fall on deaf ears, as dismissing the synths as machines is what allows the Institute to keep using them as slaves. When reminded of the option to trade the Institute for the wasteland, he is quick to remark that he's only trying to broaden the horizons of his colleagues.[2] In fact, he believes that the synths could be a further evolution of humanity, if the Institute could only allow them to demonstrate their potential. These are not popular ideas in the Institute, especially in light of the recent increase in autonomous behavior among the latest gen-three models.[3]

Beyond simply challenging Institute ideology, his affinity for working with synths is another source of problems. Following the loss of his wife, Alan has been bonding a little too closely with the synthetic replacement he created in her image, ostensibly as an experiment to determine whether synths are sophisticated enough to form social and familial bonds. Eve has, in fact, caused him to come under the suspicion of deviant behavior.[4] Justin Ayo, head of the SRB, believes that his admiration for the synths has led him to mistake them for sentient beings and that Binet helps them escape to the surface. Binet vehemently denies the charge, as he would not do something as cruel as banishing them to the hellish wasteland.[5] The situation is not helped by the fact that the rate of escapes has greatly increased in recent months.[6]

Alan will give the Sole Survivor various quests to clear areas of enemies hostile to the Institute.

Alan Binet appears only in Fallout 4.

Retrieved from "https://fallout.fandom.com/wiki/Alan_Binet?oldid=3338322"
Community content is available under CC-BY-SA unless otherwise noted.