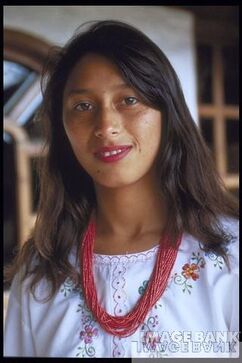 Akeisha Moon is an escaped Tibbets inmate in 2253.

Akeisha Moon is a member of the Followers of the Apocalypse. She spent the majority of her life searching for the ancient vaults and any knowledge that they may contain. She had routinely spent her time traveling the wasteland, researching stories or rumors about the vaults, investigating each in an attempt to find them. She was moderately successful in her chosen career and had discovered two vaults.

While visiting a tribe in the southwest, Akeisha noticed that an unusual number of the tribe's brahmin were dying. Although she was not trained in medicine, she was naturally curious and decided to look into the matter. If nothing else, she could report her findings to the Followers and perhaps interest them in sending someone qualified to look into the matter. Not long after beginning her research, the tribe was attacked during the night by unknown assailants and Akeisha was struck unconscious during the attack.

When she next awoke, Akeisha found herself in what appeared to be a prison cell. For untold days she attempted to contact the warden of the prison, but all she ever saw were the robot helpers. She had just about given up hope when the prison was rocked by an explosion and the door to her cell was jarred open. She wasted no time in fleeing her captors.

Akeisha wandered the desert for days until she stumbled upon a cave. She was intrigued by the sound of running water and decided to investigate. What she found was the spillway to the Nursery. As she stared in wonder at her discovery she was approached by a robot that began to question her as to why she was there. Still awestruck, she stuttered out some answer that seemed to satisfy its master. Akeisha was then invited to enter the Nursery and speak with the curator. She felt this was an opportunity that could not be passed up.

Akeisha is provided for informational purposes (she is also one of the missing prisoners). She will gladly explain everything that has befallen the Nursery since the earthquake. If the player has not already done so, she will ask him to make the necessary repairs to all Nursery equipment. If the player attempts to bring the main computer online before power is restored (by disconnecting the backup power from the Repository) she will try to talk him out of it, explaining to him the importance of the Repository. If the player refuses to listen she will not interfere.

Akeisha Moon did not appear nor was she mentioned in any published game. She was to appear in Van Buren, the canceled Fallout 3 by Black Isle Studios. It is not certain if she will appear in any future Fallout game.

Retrieved from "https://fallout.fandom.com/wiki/Akeisha_Moon?oldid=3330752"
Community content is available under CC-BY-SA unless otherwise noted.