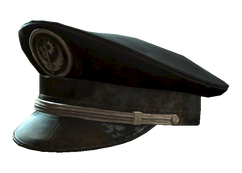 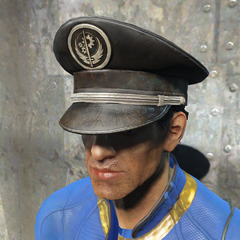 The airship captain's hat is a piece of headwear in Fallout 4.

The airship captain's hat is a unique, black peaked cap with the Brotherhood of Steel logo, worn by Lancer Captain Kells. It does not provide any protection, but does offer boosts to both Charisma and Endurance.

Worn by Kells aboard the Prydwen hovering above the Boston Airport.