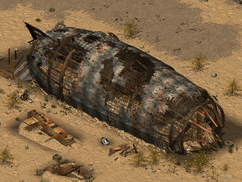 The wrecked airship in Osceolla

Some time after the fall of the Master, the Brotherhood of Steel constructed airships (zeppelins) and dispatched them to the East, to locate and assess to the extent of the remaining super mutant threat. However, a great storm broke and blew the main airship far off course. The ship suffered severe damage was, with smaller sections torn loose from the main craft, never to be seen again. The damage caused by the storm also claimed many of the Air Convoy leaders, including Paladin Latham.

The command zeppelin remained aloft, thanks to the efforts of the surviving crew, who managed to keep the wounded vessel aloft until it reached the outskirts of Chicago. There the ship crashed, and those who had lasted through both storm and the crash landing eventually formed the Brotherhood of Steel, a new organization, which diverged greatly from the ideals of the old Brotherhood.

One of the wrecked zeppelins can be found near the area later known as Osceolla. It was there that Paladin Latham, having somehow survived his ejection from the airship, established his main base after taking the name of Gammorin, and becoming leader of the super mutants to be found there.

Airships are mentioned in Fallout Tactics.

The Brotherhood on their conquest to the East

An airship crashed outside of Chicago

Airship hit by lightning as seen in the intro.
Add an image to this gallery
Retrieved from "https://fallout.fandom.com/wiki/Airship?oldid=1885855"
Community content is available under CC-BY-SA unless otherwise noted.