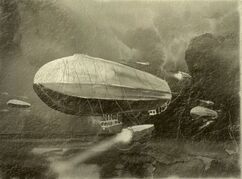 The Belt
The Commonwealth

An airship is a type of aircraft that utilizes bags filled with gases that are lighter than air to achieve liftoff and can be controlled from a main cabin. A zeppelin is a type of rigid airship.

The Brotherhood once built an entire fleet of airships less advanced than the Prydwen on the West Coast.[1] These simple air vessels are said to have been an impressive sight, but their ultimate fate is in dispute. Some within the Brotherhood believe they were either destroyed fighting super mutant remnants after the fall of the Unity or dismantled for parts and materials. It is rumored that one crashed on an expedition somewhere in the Midwest.[2][1]

Some time after the fall of the Master, the Brotherhood of Steel used zeppelins to travel east, to locate and assess the extent of the remaining super mutant threat.[3] However, while crossing the mountains, a great storm broke the main airship and blew it far off course. The ship suffered severe damage, with smaller sections torn loose from the main craft and never to be seen again. The damage caused by the storm also claimed many of the Air Convoy leaders, including Paladin Latham.[4] The command zeppelin remained aloft, thanks to the efforts of the surviving crew, who managed to keep the wounded vessel aloft until it reached the outskirts of Chicago. There the ship crashed, and those who had lasted through both storm and the crash landing eventually formed the Eastern Brotherhood of Steel, a new organization, which diverged greatly from the ideals of the old Brotherhood.[5][6] The wrecked zeppelin is to be found near the area later known as Osceolla. It was there that Paladin Latham, having somehow survived his ejection from the airship, established his main base after taking the name of Gammorin, and becoming leader of the super mutants to be found there.

The Prydwen is a next-generation airship utilized by the Brotherhood of Steel in the Commonwealth, constructed at Adams Air Force Base over a six year period. It took two years to collect the materials necessary and another four to actually construct the airship. It weighs in at forty thousand tons. The fuel source was taken from a wrecked aircraft carrier's nuclear reactor. The airship is also filled with hydrogen.[7]

Airships appear only in Fallout 4 and Fallout Tactics.

The Brotherhood on their conquest to the East

An airship crashed outside of Chicago

The wrecked airship in Osceolla

Airship hit by lightning as seen in the intro

The Prydwen in the Fallout 4 trailer