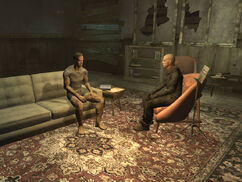 After the intro cinematic, the Courier wakes up with blurred vision in a small town called Goodsprings. It has been a particularly bad evening, and the Courier has been rescued by Victor the Securitron. The Courier finds themself inside Doc Mitchell's house. As the Courier's head begins to clear, they sit up to see the man who fixed them up, who is the owner of the aforementioned shack and the town's only doctor. The doctor will ask the Courier their name and hand them a Reflectron to examine (and customize) their appearance. The Courier will have the opportunity to assign their SPECIAL points through the Vit-o-matic Vigor Tester, and tag three skills after word-association, personality profile, and Rorschach blot tests.

Once character creation is complete, the doctor will guide the Courier to a door out into the town of Goodsprings, where he will give them a Vault 21 jumpsuit as well as a Pip-Boy 3000 and any pre-order bonus items (the Courier is also rewarded with 20 XP for completing this quest). There is no theft penalty for anything in the Doc's house during this initial quest. After leaving the house and returning, items will still not be marked as owned. The doctor has a fair amount of medical equipment, as well as a laser pistol and ammunition in a metal box. The chemistry set in the room the Courier awoke in can be used by a character with enough initial Science skill to produce either some stimpaks or a small assortment of chems. There is also a broken 9mm SMG laying on a chest near the bed in which the Courier woke up, which can be repaired and taken if their starting Repair skill is 25 or above. Also if the Courier has high enough Speech or Medicine they can talk to the doc, who will give them three stimpaks.

Retrieved from "https://fallout.fandom.com/wiki/Ain%27t_That_a_Kick_in_the_Head_(quest)?oldid=1975400"
Community content is available under CC-BY-SA unless otherwise noted.
... more about "Ain't That a Kick in the Head (quest)"
RDF feed
Has platform
PC +
FandomShop DC Trivia GalaxyQuest