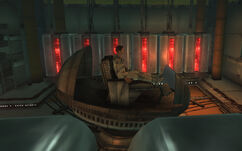 “This is a high-priority message, backup is needed at our location.”— Defender Morrill, via the Outcast distress signal.

Aiding the Outcasts is the first main quest in the Fallout 3 add-on Operation: Anchorage. It is also an Xbox 360 and PC achievement as well as a PS3 trophy.

The Brotherhood of Steel Outcasts are trying to acquire advanced military tools, and the only way to enter the vault containing these relics is by completing a military virtual reality simulation only the Lone Wanderer can enter. In the simulation, the Lone Wanderer fights in one of the greatest battles of the Fallout universe: the Battle of Anchorage, wherein the player character is tasked with defending Alaska from invading Red Chinese troops.

After installing the add-on, the Lone Wanderer receives a message about an Outcast distress signal, which automatically adds the quest to the Pip-Boy.

At Bailey's Crossroads, a battle is taking place between super mutants and Brotherhood Outcasts, who will mistake the Lone Wanderer for a Brotherhood Outcast if they are wearing Outcast power armor, and will be hostile if they are wearing Brotherhood power armor. The battle progresses through a building until the group reaches the Outcast outpost guarded by mark IV turrets. Once there, Defender Morrill, who led the Outcasts to the outpost, asks the Lone Wanderer to speak with Protector McGraw at the bottom of a freight elevator.

It is still possible to go into the Anchorage Simulation if the Outcasts are killed. Simply take the neural interface suit from Specialist Olin.

Talk to the leader of the Outcasts

At the bottom of the elevator is Defender Sibley, who is not too happy to see the Lone Wanderer (except when wearing Outcast power armor or making use of the Black Widow option); he says to keep quiet and follow him. He leads onward to Protector McGraw who explains that there is some high-tech equipment locked away and only the Lone Wanderer, utilizing the Pip-Boy, can complete the VR program and gain access. This VR program is a simulation of the Anchorage Reclamation. The simulation's safety measures, as a must, have been disabled; dying in the simulator means death in the "real" world as well. The protector then says to follow Sibley to Specialist Olin.

Olin can be found in the room with the simulation pod. She hands over a neural interface suit, which according to her is required to be able to participate in the simulation. After putting the suit on, open the simulation pod and activate it. This quest is concluded and the Lone Wanderer will then be inside the simulation at the beginning of The Guns of Anchorage.

Opened simulator
Add a photo to this gallery
Retrieved from "https://fallout.fandom.com/wiki/Aiding_the_Outcasts?oldid=3459187"
Community content is available under CC-BY-SA unless otherwise noted.