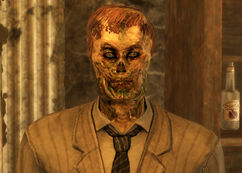 Ahzrukhal is the bartender who runs The Ninth Circle in Underworld in 2277.

Although well-mannered, Ahzrukhal is sneaky and sleazy and is adept at feeding peoples' misery. He dismisses others' morality and substitutes his own, rationalizing Charon's perpetual servitude to him as Charon's own error. In Ahzrukhal's opinion, the more miserable the patrons of his establishment are, and the more they drink, the more money ends up in his pocket. He hates competition and wishes to rid himself of Greta, who runs the only other bar in Underworld with her partner Carol, although the note on his terminal suggests the real reason he wants to get rid of Greta is so he could get Carol hooked on chems.[1] He relies on Charon to protect him and his bar.[2]

As a bartender, Ahzrukhal initially only offers alcohol, but through dialogue options (no Speech check), it is possible to convince him to offer drugs like Buffout, Jet and Psycho.

Ahzrukhal appears only in Fallout 3.

Sometimes when you inform Charon that you have obtained his contract, he will walk up to Ahzrukhal and do nothing, particularly if Ahzrukhal is asleep. This will prevent you from talking to both Charon and Ahzrukhal. [verified]

Retrieved from "https://fallout.fandom.com/wiki/Ahzrukhal?oldid=3349098"
Community content is available under CC-BY-SA unless otherwise noted.
... more about "Ahzrukhal"
RDF feed
Has platform
PC +, Playstation 3 +  and Xbox 360 +