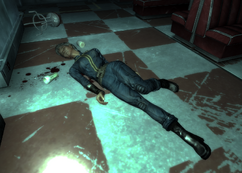 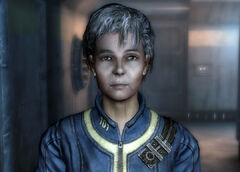 “I lost my poor wife Agnes, is what happened. In all the chaos and fighting, her old ticker just couldn't take it anymore.”— Officer Taylor

Agnes Taylor (simply called Grandma Taylor) is a resident of Vault 101 in 2277.

Agnes was once quite the explorer, working on clandestine infiltrations of nearby surface settlements at the behest of the overseer. Recently though, she's been having trouble with her heart, a fact that worries her husband, Officer Taylor, greatly.[1]

She was appointed as an "ambassador," along with Lewis, to the town of Megaton by the team leader. Her duties in this position included acting as a contact between the two settlements and to further survey the surrounding environment. She later returned to Vault 101.

When the Lone Wanderer is trying to escape the vault, the player character can see Grandma Taylor dead on the floor of the Vault 101 cafeteria surrounded by radroaches. During Trouble on the Homefront, Officer Taylor tells the Lone Wanderer that he "lost [his] poor wife Agnes" because "her old ticker just couldn't take it anymore," indicating that she had died of a heart attack amidst the chaos.

Retrieved from "https://fallout.fandom.com/wiki/Agnes_Taylor?oldid=3314527"
Community content is available under CC-BY-SA unless otherwise noted.