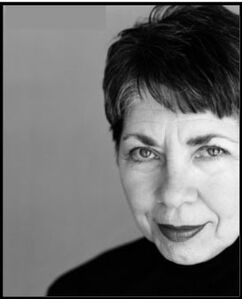 Agnes is one of the scientists at the Boulder Dome in 2253.

Agnes is a squat, round older woman with short hair, barely graying, but overly attractive. Born a tribal, and sent to university by her leader parents since they wanted to join NCR, and now specializes in biology and as a doctor. A good manipulator, but only to help people. She hates being trapped in the Dome, wants to see the sky again and misses her tribe and family, but sees the students and truckers as a surrogate. Agnes is also dying of a secret sickness, so may decide to robobrain herself in order to help keep things working at Boulder.[1]

In 2249 Agnes was a frequent diplomat from the scientific community to the NCR government, most notably President Tandi,[2] and as such the preferred leader for Victor Presper's expedition to the Boulder Dome, with a stop-off at Hoover Dam. She was ordered to recruit a particular list of grad students for the expedition and left just two days before the NCR congressional building was destroyed. Travel was hard after that, only by circuitous routes and careful display of her "diplomatic immunity" pass is Agnes' expedition able to reach Hoover Dam a year later.

She eventually encountered Goddard and with his contacts and available resources, most notably a military escort and Eddie Galenski with his reinforced truck, they reach the Dome.[3] She is the reason Goddard knows about the suspicious happenings that occurred as Agnes set out.[4]

She, along with the rest of the scientists, was infected with a strain of Limit 115 while exploring one of the Dome's labs.[5]

Agnes feels affection for Paul, mostly like a stray son, she realizes he has particular quirks and wants to help him make sense of the world. She suspects he has an addiction to Mentats and is concerned about his health and isolationism.

She likes Xian but wishes she'd watch her temper with others. They get along well and confide in each other.

She knows James has a gun and doesn't quite trust him to do the right thing, especially with his "yes-man" attitude to Goddard.

Donald once lectured Agnes, that annoyed her, but she likes him. However, she is concerned about his subservient nature and the influence James has over him.[1]

The scientists have a meticulous daily routine. After waking up, they check the power conduits to the food supply, testing the mix. After that, they check for anything that needs immediate attention, followed by a health check including blood samples and a complete physical, logging it into the computer to study the plague. They check the safety seals in their respective areas and regroup to inspect their protective suits before putting them on and re-inspecting each other's suits. The scientists check their Pip-Boys, log the routine and perform a perimeter walk of Levels 1-3. They log Presper's activity and check on ZAX, getting a report. Finally, they check on the fusion plant and assess the perimeter of the complex for leaks or possible break-ins. After all of this, they will try to spend at least an hour learning something about the Dome and the curriculum.[6]

Agnes kept a journal during her expedition which can be found and read by the Prisoner.[12] She also kept her diplomatic pass, even though it would only be useful in areas under NCR control.[1]

Agnes was to appear only in Van Buren, the canceled Fallout 3 by Black Isle Studios.

Retrieved from "https://fallout.fandom.com/wiki/Agnes_(Van_Buren)?oldid=3279055"
Community content is available under CC-BY-SA unless otherwise noted.