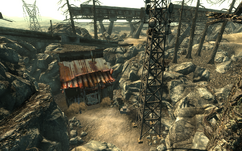 “My husband, rest his poor soul, saw to it that our house was well-protected from the elements and the inhabitants of the Wastes.”— Agatha

Agatha's house is a small, single room house in the Capital Wasteland in 2277. It is located west of the scrapyard and northeast of Meresti trainyard. It can be easily spotted by the radio transmission tower rising above the boulders that surround the house.

It is the home of an old widow named Agatha, who plays the violin and broadcasts her music using her late husband's radio transmitter. Here one can get the quest Agatha's Song to search for the Soil Stradivarius violin in Vault 92. After completing Agatha's Song, the Lone Wanderer gets the frequency to her radio station.

Agatha's house is on the caravan route, and caravan merchants can be seen making their way to and from her home. The house is nestled into the cliffs and is surrounded by boulders on three sides, towered over by a pre-War rail line with the only entrance a small wood and rope bridge that allows passage over a chasm on the west side. Over the bridge are a broken-down white picket fence and the radio transmission mast. From this tower, Agatha transmits her violin music across the Capital Wasteland. Next to the tower is a stack of metal boxes containing random common loot and a pair of empty 55 gallon drums. A damaged garden gnome is next to the left of the house's entryway.

Immediately to the right, there is a refrigerator and a dresser; immediately to the left, there is a chair and a desk with an accompanying chair. There is a bed in the far-left corner, with a toilet, bathtub, and sink in the far-right corner. The toilet contains a toy car and a teddy bear. A metal box offers common loot, and a hard-locked ammunition box offers better pickings. The container can be picked open, or the player can get the key to it through dialogue with Agatha in the course of Agatha's Song.

Agatha's house appears only in Fallout 3.

Add a photo to this gallery
Retrieved from "https://fallout.fandom.com/wiki/Agatha%27s_house?oldid=3413594"
Community content is available under CC-BY-SA unless otherwise noted.