Aeternus is a unique weapon in the Fallout 4 add-on Nuka-World.

Aeternus is a unique Gatling laser that bears the Never ending legendary effect.

Although it uses the "Never ending" effect, its actual effect gives the weapon true unlimited ammo. It will use a portion of a fusion core when first fired, but the core's charge will not decrease again while using Aeternus.

The weapon's name is from the Latin language, meaning "eternal" or "immortal." 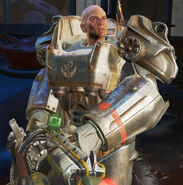