Fallout: New Vegas
“This here's where folks go when their luck runs out. Drifters up from the Republic, locals that can't turn a dime, drunken reprobates from all around.”— Captain Parker on Aerotech Office Park

Aerotech Office Park is a New California Republic refugee camp in the Mojave Wasteland in 2281, located east of Camp McCarran and southeast of NCR sharecropper farms.

Former corporate offices have been converted into a shelter for refugees and people down on their luck: NCR drifters, locals who cannot find work, and the displaced.[1] Many are hopefuls who tried to make it big on the Strip, only to wind up losing all of their money, to the point they cannot get back home. Some try to find honest work in Vegas to make enough money back to move on, but most remain stuck in a perpetual cycle of hopelessness, exploited by crooked merchants taking what little they have through crooked gambling or selling liquor.[2][3] Despite Parker's efforts, many of the refugees are further exploited through chems and crooked gambling.[4]

The NCR tries to provide the basic necessities, including shelter, water, food, and basic medical care, but the shortage of personnel makes it difficult for Captain Parker, the head of the camp, to protect everyone. Recently, people have disappeared from the camp without a trace.[5] The Followers member Bert Gunnarsson ministers to those trapped at Aerotech, unable to change the situation on his own.[5][2]

The office park is walled off from the wasteland by scrap fences and rubble. The entrance can be found on the northern wall. The main door is very tall, approximately three times taller than the Courier. A large courtyard is located in the center, with tree stumps, broken street lights, barrel fires, derelict cars, and piles of refuse.

The Aerotech Office Park signage was created by Megan Parks.[6] 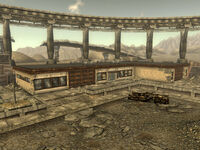 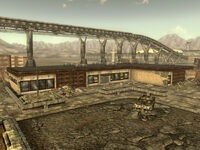 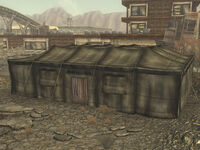