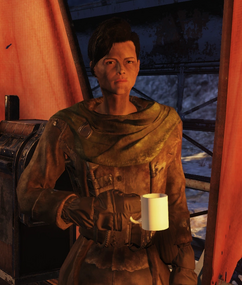 Ae-Ri is a weapons merchant at the Crater in 2103.

Ae-Ri joined the Raiders at some point before they returned to Appalachia. She runs the gun store in the Crater.

Ae-Ri commonly trades in stolen items, especially pipe pistols and combat knives, which she is annoyed to keep getting.[1] She is also able to recalibrate scopes.[2]

Ae-Ri appears only in Fallout 76, introduced in the Wastelanders update.

Retrieved from "https://fallout.fandom.com/wiki/Ae-Ri?oldid=3407270"
Community content is available under CC-BY-SA unless otherwise noted.