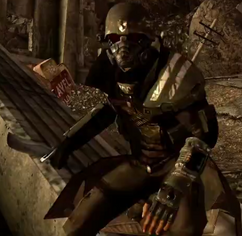 The Advanced riot gear is a suit of armor in the Fallout: New Vegas add-on Lonesome Road.

The Advanced riot gear appears to be a more heavily armored version of the riot gear. The shoulder pads are bulkier and worn on top of the duster, and the chest plate seems to be slightly greener. The helmet's gas-mask/air-filtering system seems to be more advanced. There seems to be some kind of forearm protection on the right arm. It also appears to have a golden 11th Infantry emblem on the helmet. The suit itself looks a lot thicker and the duster looks darker.The eyes of the helmet glow red at night, much like the NCR Ranger combat armor during the Fallout: New Vegas intro.

Despite looking like an altered NCR Ranger helmet, the elite gear helmet cannot be repaired with one, as it is classified as heavy armor.

Retrieved from "https://fallout.fandom.com/wiki/Advanced_riot_gear?oldid=1382477"
Community content is available under CC-BY-SA unless otherwise noted.